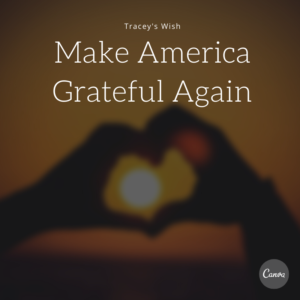 Two days after Christmas last year, I hitched my belt and realized that I had to go out a notch further than usual. And then my inner critic stepped to the front of the stage.

I’d know that voice anywhere; the one that is very good at making me feel like sh*t about myself, and today she picked up the mic and started in on one of her favorite routines: the "you need more self-control," finger-wagging, body-shaming litany. "How hard is it for you to enter your consumption into your My Fitness Pal? When will you ever learn that a two-drink limit is the limit? You can’t even manage that?"

My phone buzzed, and I swiped to a text expecting the usual. Instead, the text from my oldest daughter shared that, Tracey, a dear friend and neighbor who had been battling breast cancer for some time now, had entered hospice. This is the news that makes everything else stop, takes your breath away, pushes away the detritus of a cluttered mind. It demands you take stock of what actually matters, that you acknowledge and then politely tell your ego-driven negative chatter to sit down and shut up already.

Tracey had come to our house for dinner with four friends a few months before. That night had been filled with laughter and love, and I didn’t know it would be the last time I would be in the presence of her laugh, her caring, her sparkle. She was as beautiful as ever, her cropped blond hair under a stylish baseball cap, cute jeans; her brilliant smile and positivity.

There were obvious signs that her illness’ relentless march on her body was headed towards the inevitable. Her tee-shirt fell loose over the drain that she attended to daily to relieve her abdomen of excess fluids. She did not mention this though; instead, she asked about our children and our lives: How is Natalie? Is Aaron still enjoying school in Vermont? She went around to each of us asking after our families and then animatedly talked about helping her oldest plan the details of asking his girlfriend to marry him, sharing the details of how he planned to pop that question intimately at the beach and then bring her back to the house full of family to greet and toast them.

As I took a bite of roasted eggplant and sweet potato, I noted how this former Villanova volleyball and softball athlete’s upper arms were as thin as my wrists. And now she was in hospice. My thoughts fixated on her family. Husband. Four kids. Cuddy, her cat who rode on the dashboard of her Ford explorer on the hour’s drive to the lake. A someday grandchild. The things in life that I take for granted and look forward to were likely no longer a possibility for her and her family to share.

Tracey passed away on December 29, 2018, having clearly willed herself to spend one last Christmas with her husband and children. I noted how the sadness was of an altogether different shade than when my dad passed at 75 (versus a good friend, and at only 55). I thought about the how work each of us has come here to do doesn't come with a guaranteed amount of time to do it in. If there is something that you’ve come here to do, well... you better just do it.

Packed into the family’s church at the celebration of life, the pastor made a point of remarking that he had had fewer people attend the services of former governors.  Her sister, her brother, all four kids, and her husband, Jay, all spoke about how Tracey was the most giving, positive, and fun person they had known. How she had not just been a mother to her own children but had been a second mother to many of her friends’ children, as well.

And then, in the middle of his remarks, he stated, “You know, when Tracey was in hospice she and I got to talking. She felt that Trump has got it all wrong. We don’t need to Make American Great Again. We need something else. This was her wish." Jay held up a white tee-shirt with a large breast cancer ribbon front and center and a bold statement of four words printed in all caps.  “MAKE AMERICA GRATEFUL AGAIN.”

We each received a tee-shirt on the way out of the church and were charged with doing one small thing, one random act of kindness a day, one kind word a day to spread what Tracey had spent her life doing: sharing her love with those around her.

At night when I lay in bed, I think about how I have the option of hugging my kids when they are upset, or hugging them just to marvel at how some of them are taller than me (the rest of them might be taller than me soon). How I can reach over and hold Dave's hand. How I can call Dave during the day to say hello and laugh and tell him about how Aspen has once again systematically removed the white poly fill from her daily victim (frog, octopus, squirrel—wow, it is a good thing I did not get rid of all of the stuffed animals in the house), her own snow maker spreading fluffy boredom across the floor.

And, I think about how, if we can approach life’s daily challenges which start with the news and disagreements and self-admonishments from a place of gratefulness, that shift in perspective can change everything: It can make the ice on the trees a little brighter, bring a smile to a cashier’s face, flip the pressure we all feel when we are caught in the drudgery of day-to-day and turn it into possibility.

It can remind us that to be grateful is to lead ourselves and those around us into a better day. And, it can remind us that those shrill, ego-driven inner critics that are telling us that we are not enough, and might not ever will be are just the many iterations of fear. Fear that is holding each and every one of us back from being who we are truly meant to be.

Each of us has the capacity to be a grateful spirit in all of the roles we play; parent, sibling, friend, co-worker, boss, customer or caregiver. Each of us carries within us the opportunity to spread joy. By Making America Grateful Again, we can Make our World Grateful Again too.

P.S. If my inner critic shows up, I remind myself that it is privilege to spar with such ridiculousness and it is my duty to tell her to shut up.
P.P.S. The eggnog from last year’s TRX Soul Shiner Christmas dinner was divine. Bob had made it from SCRATCH. Who makes eggnog from scratch? It’s been almost a year, and I am still grateful for every sip. Notches be damned.