He Used to Call Me Names. Sometimes I Was Scared. 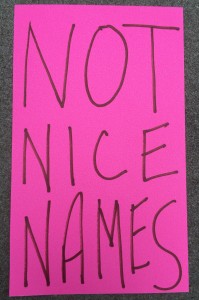 "I think I want to write about it."

"You can write about whatever you want."

"I want to write about it. But I don’t know where to start."

"She sat up a tiny bit straighter. I want to write about it. He used to call me names."

"You know, lists are good for groceries, tasks, and just about anything in life that is more than one thing. So, how about we write a list of the names that he called you?"

Riley was in the beginning of her senior year in high school when we met for our kickoff meeting. She and her mom came to my home office and sat in my living room. Riley sat at one end of the couch, her shoulders slumped forward and her attention on our dog, Buxy.

Riley arrived for her third session a bit more relaxed, but still guarded. Her application was due in a few weeks, and she was determined to get started on her essay.

I asked her to list 20 objects representative of her (an awesome brainstorming exercise you can check out on collegeessayguy.com). After sharing some of what I’d choose, I handed her a blank yellow legal pad, pointed to the mug full of colorful pens and pencils, and went to make a cup of tea.

A bit later she called from my office, “I can’t think of any more. I have 18.” I walked back in and told her, “Just two more. That’s all you need.” She eyed me.

I smiled. “Don’t overthink it.”

We went over her list. A pack of Orbitz® bubblemint gum, her varsity soccer letter, a raisin bagel with cream cheese, a scarf her mom had given her for Christmas. She went through her list. 19 objects.

She stared at her list. Her shoulders curled. She spoke: "A broken heart."

I nodded, waiting, and then asked, "Do you want to tell me why?"

"My boyfriend and I broke up. We might get back together. I don’t know. He used to call me names. Sometimes I was scared."

She sat up a tiny bit straighter. "I want to write about it. He used to call me names."

"Um," she felt she had to clarify. "They were not nice names."

The pool I went to growing up, the one where my mom would drop me off from the back of her motorcycle at 9 a.m. with my towel, a dollar, my metallic copper helmet, and a "See you at three!", had a 32-foot diving platform. My friends and I, at 10 years old, were never brave enough to dive, but we thought we were pretty brave just to climb the ladder, the tower wiggling just enough that we could feel the sway. And as we stood at the edge of that platform, toes curling on the AstroTturf®, we knew that we couldn’t wait forever to jump, that chickening out was not an option. So one by one, we took a deep breath and jumped. And if we were lucky, we remembered to keep our legs squeezed together and our toes pointed and our arms pressed hard to our ribs because in a few short seconds that seemed to stretch to minutes we would hit the water.

I had to jump first: "Was bitch one of the words? Should it go on the list"?

She gasped. I told her I had heard it before and that I hated it, too. But did it belong on the list?

Riley sat up even straighter. And then she added more words and some phrases.

Afterward, she told me about one date where he had driven wildy in his jeep, not slowing down or letting her out, because she had pissed him off. That’s when she decided they should take a break. "But, she admitted. I think it is a break-up."

Riley wrote her essay about her break-up. Sort of. She mostly talked about a friend of hers who was with a boy who also used not-so-nice nicknames. In it, she wrote two full paragraphs about how worried she was about her friend because she kept going back to the boy, and he really is a complete asshole, you know. And how could she go back to that guy? "I don’t get it, " she admitted. "I’m trying to get her to see that he is, you know, not nice to her."

Riley was accepted to a couple of schools, but she decided to start at community college. She works part-time at the register at one of our local stores, and one day, I found myself in her line. Shoulders back, she smiled brightly and told me how fascinating her anthropology class is. I don’t know if she ever dated that boy again, but I do know that writing that list put her fears in a place a lot less scary.
By Jessie Peck Martin
Under helloPOTENTIAL & unabashedlyAUTHENTIC
5 min read
Like
Share Tweet Share