Modern Epidemic: The Comparison Flu, Is it Mucking With Your Teen? 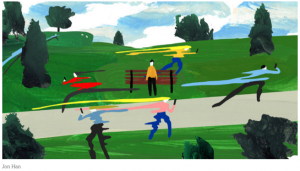 Rushing here and there and clocking in 5+hrs/daily on our smartphones. Have you succumbed to the Comparison Flu? Arstist: Jon Han SOURCE: NY Times

There may not be a vaccine, but don't worry. There are ways to interact with your beloved social media platforms and build up your immunity to the comparison flu at the same time.

Don’t make the mistake of comparing your twisted-up insides to people’s outsides.

Even the most privileged person suffers the torments of the damned just going about the business of being human.

Most people do not going around sharing their deepest fears and daily anxieties with the person standing in line behind them at the ShopRite while purchasing hearts of romaine lettuce and a half-gallon of 2 percent milk. “I think my girlfriend is cheating on me. I am never going to find anyone else, and the prom is next month." "My dad says I should become an accountant, but I really want to be a disc jockey; I just can’t tell him." "I am the dumbest person in my AP U.S. history class, but as long as the teacher doesn't call on me, I can fake it. But the last time I spoke up, I said the Battle of Gettysburg took place in Virginia. Can you see this zit on my chin?”

And here is the thing: Most people are not posting all of this baggage on their Instagram accounts. Nor are they talking about them. Your peers are posting what they want you to see. This does not equate with the truth. And if you are continuously comparing yourself with the cherry-picked, cropped, edited, and tinted pictures, chances are you'll look up from that smartphone feeling less than. Keep that in mind. Use social media to encourage your friends, to love them; go on hitting those Like buttons. because social media can be fun. It helps you to keep in touch with so many people. Again, just do so mindfully, keeping a wary eye out for the signs of the comparison flu: Let us be perfectly clear here: This has a whole lot more to do with how you are treating yourself than it does with how you treat others, although the two are inextricably intertwined. It is imperative that you are kind to yourself. Being kind to yourself is the keystone for being the best you. Comparing yourself up or down is NOT being kind to yourself.

From my experience, succumbing to the comparison flu is a habit that ensures angst, anxiety (performance and otherwise), depression, desperation, and a truly crushing amount of stress. And let's consider the following research on how often subjects 18 to 33 used an app on their smartphones. A recent New York Times editorial stated, “Participants estimated an average 37 uses throughout the day, but the actual number was around 85.” This clocked in at a whopping 5.05 hours on any given day. And, by definition, interacting with any social media platform is an invitation to comparison—virtual, real, or somewhere in between.

So, what's the remedy? Figure out how much time you need away from the feed to fully recover, to feel okay with being you. You can do it. I know you can, and so do you. In fact, your most helpful and glorious self within knows better than anyone that you most certainly can—and should; you just have to be willing to let that voice lead you.