Vaseline. On My Face? — What Winter Surfing Taught Me about Avoidance 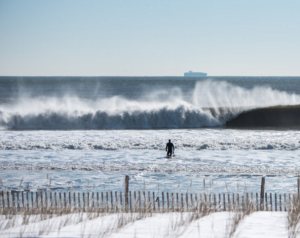 Wetsuit technology was on the cutting edge back in 1978, and, after a particularly fruitful shopping expedition at a surf shop on the Jersey Shore, my parents could not wait another day—let alone a few months—to try out our newly acquired dry suit aquatic apparel. The fact that it was March and the temps were barely out of the 30s (Fahrenheit) did nothing to chill their enthusiasm. I, too, benefited from the shopping trip and had strained my head through the tight neck hole, breathing in the unmistakable smell of neoprene and the coconut-scented wax that permeated the shop. I stepped out from behind that woven hemp changing room curtain and told myself this nonsense would end soon, that they couldn’t possibly want to go surfing today. I had worn my CB ski parka into the surf shop.

As we drove around checking out the swells at the known best spots, I got lost in a book. I was good at the getting-lost-in-a-book technique; it was my classic avoidance tactic, the plot pulling me far from my impending reality. Even after my dad had pulled the van into a deserted beach parking lot, my mom had walked the dogs, and they both had pulled the surfboards out from under the custom bed, I sunk deeper into the plot—and my parka.

Half into his wetsuit, his chest bare and fingers spreading Vaseline on his neck and face, Dad said the words that I had been running from for hours, “Come on, Jess. Suit up.”

And as much as my 11-year-old self wanted to stay warm and cozy with my book, the reality of the next hour presented its cold, wet, and salty self. There would be no protesting; I knew better. And as I squeezed my head through the still-fiercely snug neck hole and spread Vaseline thick and cool on my face so we could make like artic seals, I was already thinking of when I could wiggle my way out of this rubber straightjacket, sprinkle talcum powder on my feet, and get back into that parka. That was going to feel good.

I often witness a similar sense of dread and keen avoidance in my office now. I don’t ask my students to wrangle a wet- or a dry suit, nor do I keep Vaseline close at hand to more bravely face white-capped breakers, but I do, with an enthusiasm close to my parents’ level of zeal, ask them to write. With a pen and a piece of paper, I ask them to put a story from their past in two-dimensional form. There is a percentage, I dare not quantify, that stare at me incredulously, having done a very good job of avoiding this known task that comes with applying to college. The air of avoidance sweeps into the office and settles squarely between student and my enthusiasm.

An object at rest tends to stay at rest, and if these students have never felt the urge to journal, I am certain, given the choice, they would choose waxing up and paddling out over writing the essay. Because it is a scary business, to not know what it is you want to write about, to not yet realize there is that one story that has been sitting in your stomach like a stone, the one you have done a really good job of keeping it buried. I am lucky, though, because the student knows that an essay or two or three-dozen need to be created, edited, and submitted to reach the goal: actually applying. The fear of not applying, of not gaining admissions, outweigh all else.

In Leap of Perception, Penney Pierce explores the evolution of our reptile, left, and right brains to harness the power of our attention. She details ingrained habits, one being the Avoidance Habit: “Fight, flee, deny, and control. A wide variety of methods for dealing with fear have developed over time… One of the most direct solutions is to simply avoid situations that threaten us.”

I was not thinking of the thrill of a wave caught or the beauty of a beach all to ourselves or a group of seagulls that would lean into the gusts. My intent was to not really think about it all, but to just... endure. But once in the water, and after the initial shock, there was fun to be had in those waves for the three of us. And satisfaction and camaraderie once dry in the van, headed to McDonald's.

The same applies to writing the essay, avoidance gives way to the intent, the job at hand, and a flow, a release, a story that has been waiting to be told. And while the first piece is often the most difficult, there is unmistakable pride and joy as a student shares a piece of him- or herself on paper. For me, there is double job, as the subject matter is always as unique as the individual. There was Kyle, who wrote about the challenges and life lessons of growing up with an older brother who has a disability; Morgan, who shared a philosophy of life based on broccoli; or Leslie, who needed to write about a boyfriend’s bad temper before realizing she didn’t need that in her life one more day.

Taking that leap into the cold breakers is the hardest part, but once you are in the water, you start paddling and maybe even wishing you hadn’t spent all that energy avoiding, and the paddling becomes easier. And you notice the sky and the seagulls and sea oats and the smell of the salty ocean.