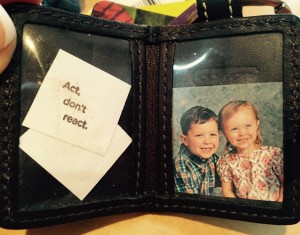 Jessie's photo holder keychain, in use since 2008. What mother would dress her pre-schoolers in such clashing attire on picture day?

Delia, a bright-eyed high school junior, sat in my office.

“You saw my transcript?” She asked in a cringing tone. “I’m trying harder. I’m working on that.”

I had reviewed her transcript. She clearly had the best of intentions. Her freshman year, though, was killing her confidence, not to mention her GPA. One B, 3 C’s, and 2 D’s. She had a 2.3, brought up only by a solid B in an elective. Her sophomore year she had brought up her average to a 2.6. As Delia planned on applying to highly competitive nursing programs, this would need to come up.

I started with my standard, a truth many students forget: “Remember, you are so much more than any grade.” Then I asked the question that invariably elicits one of two responses. “How have you changed your studying strategy?”

In case you were wondering, neither one of these strategies brings up a GPA. There is, however, one simple strategy that does. _____

During the winter of 2008, I discovered Yogi tea. The tea is a delight, but the paper squares with typed intentions are even better. As I looped the string under the mug’s handle, I would read and sometimes reflect on the snippets of wisdom. I still do.

Every smile is a direct achievement.

When the mind is backed by will, miracles happen.

Travel light, live light, spread the light, be the light.

There is one Yogi paper square I've carried on my keychain, in a tiny photo holder, since the day it found its way to me; it has been there for the 8 years, reminding me day in and day out " Act, don’t react.".

After I stop thinking about the mother who would send her preschoolers to picture day knowing full well they would be photographed together in such clashing attire, I go back to the intention typed in chocolate brown ink: act, don’t react.

Here’s the thing: Our children, our adolescents, our teens, and our young adults are being raised in a perpetual state of reaction, and often with a visceral fear that they will miss out or be excluded if they don’t respond, and respond appropriately.

Our 9 year old received an iPod Touch for Christmas this year. After dinner over break, she lazed on the secondhand chair that is everyone’s favorite spot in the kitchen, including the dog's, and tapped away on the slick screen backed with pink metallic muttering, "Let me finish this. I just have to finish this."

Mesmerized by her screen, “Oh you just pick your favorite. It’s very cool. Comparing things. I like it.”

She then asked me, “If you have to be allergic to either water or air, which would you choose?”

“What’s the game called?” (She's used to such non sequiturs from me, and aren’t water and air career enders?)

A recent article in the Times about Wishbone explained, “As with coffee and newspapers, the key to a successful app is to make it a daily habit….Push notifications — those incessant reminders that make your phone light up and ding—are the infantry of app warfare, cracking the attention span to remind users that someone on the Internet might be talking about them.”

Somehow the screen of the iPod cracked on day 4 and she hasn’t looked at it in two weeks. I am okay with this. Instead she has 5 books she has started and chooses a different one each night to move a bit ahead in. She finished one novel last week and I nearly did a dance. Our days, cut into such tiny slivers with competing agendas, when do we complete a thought? When was the last time we started and completed a task in one sitting?

As a parent I have racked up the miles and spent a significant sum availing my children with extracurriculars. Guitar, soccer, travel soccer, soccer camp, robotics, gymnastics, story hour, Brownies, sketching lessons, piano, basketball, alpine ski racing, Cub Scouts, Boy Scouts, Karate, Pottery. You get the idea. What happened to hide and seek in the neighborhood and The Hardy Boys? Then I found this piece of research that helped me to reconcile with the above efforts.

That’s why signing kids up for piano lessons or sports is so important. It has nothing do with creating a good musician of a 5-year-old soccer star. When you learn to force yourself to practice for an hour or run fifteen laps, you start building self-regulatory strength. A 5-year-old who can follow the bar for ten minutes becomes a sixth grader who can start his homework on time.

-Todd Heatherton, The Power of Habit

And this child becomes a student who can study one subject in a concentrated manner. And this same child eventually becomes a 17-year old who reaches out and follows up with thoughtful, grammatically correct emails to an admissions officer. Guitar lessons it is. And while we're at it, how about completing a thought? Having a conversation? Yes, let’s do that.

“Sure, I mean, it can’t hurt, right?” she responded, dubiously.

“Turn your phone and all social media off while you study. Music is fine. Music without words is even better. Just be sure to turn off the social media. How well could you study for your calculus exam if you were at a small party with your friends and every two minutes someone came up to you and poked you in the ribs... and then asked you to rate a selfie she took with her Chihuahua, Trixie?”

"Right! Now, you decide how you want to start this. We'll call it the Study Block Challenge. I’ve had students start in 15-minute increments. Thirty minutes or an hour-long block are more effective, but start small. Choose a subject, set the timer, and dive in. At first you might be dying to check your phone. You might even hear phantom pinging. You’ll survive. So will your friendships. Tell your friends, 'I’ll be offline to study.' That’s okay, too.”

Evaluate the work that you’d like to complete. Think about what subjects and tasks need to be completed. Gather your materials, your glass of water, your snacks. Put your phone on airplane mode and set the timer. Ready? Now, get better grades.

When Delia applied to college she had a GPA of a 3.45 and had bumped her overall GPA to above a 3.0. She received offers of admission to two of her top three programs. She also received merit aid of close to 10k annually. Would you like to be paid 40K for turning off social media for a stretch?